Move over Google Docs, IBM’s back in the game!

Over the years, Microsoft has controlled the Office market – with Word and Excel being used everyday by millions of people. Even schools are teaching children to copy and paste etc using the familiar Microsoft products that they most likely also use at home.

People may fondly remember WordPerfect or VisiCalc, or may have tried OpenOffice and other alternatives to Microsoft, but for most organizations, the de facto standard has been MS Office.

And then, as the world became aware of cloud computing, those freethinkers at Google gave us GoogleDocs – an online equivalent for the basic Office functions. And the big advantage was that you could access your files from whichever computer you were on (provided you had Internet connectivity). There was no excuse about bringing the wrong memory stick and not having a copy of the document. I use the GoogleDoc plug-in to Office so that my files are stored in the cloud in case I need something at a client’s site.

Of course, Microsoft also has a cloud-based version of its Office suite called Microsoft Office 365.

But now IBM has thrown its hat in the ring. It has announced the beta of IBM Docs, which is tied into its SmartCloud for Social Business Suite. So how does IBM hit the ground running with its own Office suite? Well, it got its hands on Lotus Smartsuite in 1995, when it also got Lotus Notes.

IBM Docs allows organizations to collaborate on word processing, spreadsheets, and presentations. The plan is that there will only be a Web-based solution – no need for any browser plug-ins. In addition, its LotusLive has been rebadged as SmartCloud for Social Business. This provides users with easy access to social networking, file sharing, meetings, e-mail, calendars, and instant messaging.

The Web site at https://greenhouse.lotus.com/wpsgh/wcm/connect/lotus+greenhouse/lotus+greenhouse+next+site/home/labs/ibm+docs says: “IBM Docs is a new office productivity suite for working on documents, spreadsheets and presentations – together – in the cloud. With IBM Docs there is no desktop software. You only need a browser and an account, and you are able to easily create professional looking documents and share them with others. IBM Docs is simple yet powerful – letting you get started quickly, but delivering the advanced features you need.

Once you’ve signed up, you can create and share documents, you can comment on documents, and you can assign parts of documents to teams to complete. In effect, everything you would look for in a cloud-based Office equivalent. Does it provide workflow features like Microsoft’s SharePoint? I don’t know the answer to that yet.

Will it work? It will be interesting to see. The linking with social networking is something that many enterprise organisations will find beneficial. There’s certainly room for another heavyweight to enter the fray. And it should be beneficial for us users if the big players offer more-and-more facilities for us to use as a way of keeping our interest and our business.

I’m sure we’ll be getting far more information about this initiative (and it is still in beta), but I thought it was worth noting now. Personally, I’d like to see a cloud version of the Adobe suite – InDesign, PhotoShop, Dreamweaver, etc.
Posted by Trevor Eddolls at 10:18 0 comments

The Arcati Mainframe Yearbook 2012 is now available for download from www.arcati.com/newyearbook12 – and it’s FREE. Each new Yearbook is always greeted with enthusiasm by mainframers everywhere because it is such a unique source of information. And each year, many people find the results of the user survey especially interesting. And this year, for the very first time, survey respondents indicated that, at their sites, more data was stored off mainframes than on.

This surprising result came from the 100 respondents who completed the survey on the Arcati Web site   between 1 November and 2 December 2011. 40% were from Europe and 50% from North America, with 10% from the rest of the world.

Looking at MIPS growth produced some interesting results. Larger, more mature businesses (above 10,000 MIPS) were almost all experiencing some growth, but predominantly in 0 to 10% per year category. Sites in the 1000-10,000 MIPS range were showing a range of results with some sites suggesting a decline while others predicted growth of up to 50%. Sites below 1000 MIPS were experiencing a more complex future, with most expecting a small growth, but almost as many expecting no growth or negative growth (a business-speak euphemism for decline). The mainframe market does appear to be quite fragmented with competitive pressures at the lower end of the mainframe market, and some respondents commented about lack of understanding amongst management about the value of mainframe computing.

It was interesting to see that 6% of respondents had the zEnterprise z114s, with 19% having the z196s models installed. I expect that future surveys we’ll ask how sites are making use of the extra features on these models. Previous surveys have shown that there is a willingness amongst mainframes (especially larger ones) to purchase new models as they become available. In order to benefit from the new features

The big talking point during 2011 was cloud computing and whether mainframers really have been doing it since the 1960s and the impact of offering software (and anything else) as a service. The survey asked whether respondents currently used their mainframe for cloud computing. Just 12% (up from last year’s 2%) of respondents said they did. 34% said they didn’t, and the rest weren’t sure. It’s still early days for a cloud computing initiative to move off the PowerPoint slides and into the business environment, so the survey asked whether respondents were planning to adopt cloud computing as a strategy. 40% said they weren’t at present. Just 18% thought some mainframe applications would be cloud-enabled in the future. It will be interesting to follow these figures in future surveys.

The survey inquired about what proportion of enterprise data resides on the mainframe and what on other platforms. This produced, for the first year ever, the surprising result that more than half of the respondents use other platforms to manage the lion’s share of their corporate data. 44 percent of sites surveyed have more data on their mainframes, whereas 56 percent of the sites surveyed have more data stored on other platforms. Unfortunately, the survey was unable to drill down to find out why, but we can speculate that it may simply be the growth of data associated with the non-mainframe side of the business. It could be a result of the quantity of e-mails that organizations store for their staff. It could be that non-mainframe data is less well managed and ‘spreads’ into larger data sizes. Perhaps non-mainframe databases are less space efficient. Or maybe, people just create and save Excel spreadsheets and Word documents on Windows servers, where they wouldn’t keep equivalent files on mainframes. Or perhaps sites move their mainframe archive data off the mainframe, but still have it available online on, for example, a Linux distributed system. I’d be interested to hear yiour views on this.

The comments in the survey identified management ignorance of the power and benefits of using a mainframe. This is now a perennial reason given for the decline in mainframe computing within organizations. But cost was also highlighted as a factor mitigating against the successful growth of mainframe computing. One respondent suggested, “software costs are sinking the mainframe”.

Anyway, full details of the responses to many other questions can be found in the user survey section of the Yearbook. It’s well worth a read.

The Yearbook can only be free to mainframers because of the support given by sponsors. This year’s sponsors were: CA Technologies, Serena Software, Software AG, Software Diversified Services (SDS), Type80 Security Software, and William Data Systems.
Posted by Trevor Eddolls at 09:31 1 comments

The Arcati Mainframe Yearbook 2012 has been published

Every year, about this time, mainframe users are excited to get their hands on the latest edition of the Arcati Mainframe Yearbook. What makes the Yearbook stand out is that it’s an excellent reference work for all IBM mainframe professionals – no matter how many years of experience they have.

What makes this annual publication so important? The answer is that it provides a one-stop shop for everything a mainframer needs to know. For example, the technical specification section includes model numbers, MIPS, and MSUs for zEnterprise processors (z196s and z114s). There’s also a hardware timeline, and a display of mainframe operating system evolution.

In addition, there’s the glossary of terminology section explaining simply what all those acronyms stand for, but in a way that means you can understand them.

One section provides a media guide for IBM mainframers. This includes information on newsletters, magazines, user groups, blogs, and social networking information resources for the z/OS environment. Amongst the things it highlights are zJournal, INSIGHT-SPECTRA, IBM Listservs, SHARE’s Five Minute Briefing on the Data Center, Facebook fan pages, and LinkedIn discussions. As well as user groups such as SHARE and IDUG.

The vendor directory section contains an up-to-date list of vendors, consultants, and service providers working in the z/OS environment. There’s a summary of the products they supply and contact information. There are a number of new organizations in the list this year, and, sadly, a few familiar names have ceased trading.

The mainframe strategy section contains articles by industry gurus and vendors on topics such as: Why incremental process-driven IT modernization is relevant for your business; Network management for the modern data centre; Next-generation mainframe management; Best practices for application release management; Peeling the onion of SFTP: options for securing file transfer to and from z/OS.

For many people the highlight each year is the mainframe user survey. This illustrates just what’s been happening at users’ sites. It’s a good way for mainframers to compare what they are planning to do with what other sites have done. I will be looking at some of the survey highlights in my next blog.

The other great thing about the Yearbook – as far as many of the 15,000 people who download it are concerned – is that it is completely FREE.

It can only be free because some organizations have been prepared to sponsor it or advertise in it. This year’s sponsors were: CA Technologies, Serena Software, Software AG, Software Diversified Services (SDS), Type80 Security Software, and William Data Systems.

To see this year's Arcati Mainframe Yearbook, click on www.arcati.com/newyearbook12. If you don't want to download a large PDF, again this year, each section is available as a separate PDF file.

Don't miss out on this excellent publication.
Posted by Trevor Eddolls at 12:42 0 comments

We start the year with another in our series of SharePoint hints and tips from our expert Darren Pritchard. This time he’s looking at how to sucessfully audit SharePoint site collections. 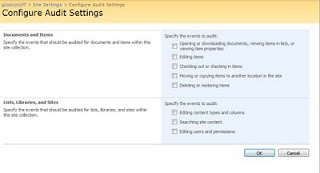 I would suggest running this on a system without users because it may have an impact on performance.

If you have large amounts of audit log files, I would recommend running the trim command on a month’s worth of audit logs at a time. The SQL transaction log file will grow very large during the trim process.

Once you have trimmed the audit logs you will need to run a shrink database task within SQL to reclaim the space used during the trim process.

I'd like to thank Darren for his continuing contributions, and a happy New Year to everyone.
Posted by Trevor Eddolls at 10:03 0 comments